Reporting Corruption in the work place:When to Blow the Whistle?

Acts of fraud and corruption amongst executive management are two of the main downfalls that can bring a company to its knees. The question that arises is what transpires when an employee reports such acts.

Whistle blowing is common knowledge in the business environment. However it can be argued that employees may not be fully aware or understand their rights and the laws regulating it. This article will be addressing the procedures, and laws pertaining to whistle blowing.

The Protected Disclosures Act 26, 2000 (“the Act”) also known as the Whistle Blowers Act makes provision for employees in both the private and public sector to disclose information regarding unlawful or irregular conduct by their employers or other employees who have been employed by their employers. The Act offers extensive legal protection for employees which in essence will put one’s mind at ease if ever he decides to ‘blow the whistle’.

The definition of ‘disclosure’ as defined in the Act is vital in determining when to report such information. Information should be disclosed if that employee has reason to believe that an employer is involved in any one of the following:

The most important object of the Act is to protect an employee from being subjected to an ‘occupational detriment’ on account for having made a ‘protected disclosure’. A protected disclosure is a disclosure which is made to a legal adviser, employee, member of the executive council of a province and a certain person or body. 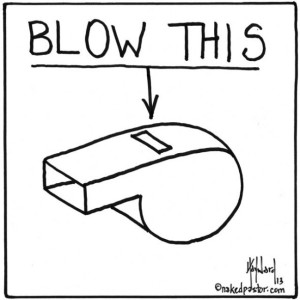 A protected disclosure to an employer is any disclosure made in good faith and is substantially in accordance with any procedure prescribed, or authorised by the employee’s employer for reporting or remedying the impropriety concerned.

The occupational detriment from which an employee is protected is:

An employee who has been subjected to occupational detriment by his employer on account of having made a protected disclosure can approach any court having jurisdiction including the Labour Court established by section 151 of the Labour Relations Act, 1995 (“the Labour Act”)  for appropriate relief. An employee may also pursue any other process allowed or prescribed by any law.

The Labour Act further enforces protection for employees and the relevant provisions are mentioned in the Act.  Section 187(1)(h) states that a dismissal is automatically unfair if the reason for the dismissal is a contravention of the Act by the employer, on account of an employee having made a protected disclosure defined in the Act.

Section 186(2)(d) further states that an unfair labour practice means any unfair act or omission that arises between an employer  involving an occupational detriment, other than dismissal, in contravention of the Act on account of the employee having made a protected disclosure.

Making headlines in recent news in relation to whistleblowing is South Africa’s leading integrated communications company Telkom. It has been reported that six employees have come forward with allegations of fraud of funds and other acts of corruption that’s taken place amongst high-ranking management. Employers should be aware of all the protection afforded to employees in terms of the above mentioned Acts before acting on the said allegations.

The secure protection encourages employees to speak up and report any violations or suspected violations.  Whistle blowers have the full support of our law behind them. Act now! Expose and end corruption!